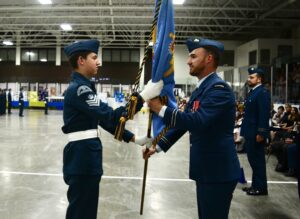 Major Jonathan McAuley was born in Sault Ste. Marie “the Soo”, Ontario. Raised in the heart of the francophone community in Northern Ontario, he was quick to understand the importance of inclusion and diversity for our society. The Soo was where Major McAuley was introduced to the Canadian Cadet Organization as a member of 155 Borden Gray G.C. Royal Canadian Air Cadet Squadron (RCACS) in 1997.

In the year 2000, following a decade of defending French language rights in the Soo, Major McAuley and his family decided to move to Ottawa and make the national capital their home.

Based out of the east-end of Ottawa, Major McAuley continued his cadet membership as a member of 632 Phoenix RCACS, where he excelled as a cadet. He received leadership awards while training in Cold Lake, AB. Graduating from the cadet program at the age of 19, Major McAuley then enrolled into the Canadian Armed Forces reserve, as part of the Cadet Instructor Cadre. While studying at the University of Ottawa, he worked as a leadership instructor in Cold Lake, AB, and became a member of 632 RCACS’ training staff.

In 2012, Major McAuley was appointed Commanding Officer of 632 RCACS and subsequently promoted to the rank of Major. He led a team of 20 personnel and a squadron of approximately 175 cadets, with a focus on improving the quality of the youth program while building strong community relations. For his work in the community, Jonathan was the recipient of the Queen Elizabeth II Diamond Jubilee Medal in 2012, and the Orleans Heart of Gold Award in 2014. In 2015, Major McAuley was awarded the Canadian Forces Decoration (C.D.) for 12 years of good service in the Canadian Armed Forces. In 2016, he completed his mandate as Commanding Officer of 632 RCACS.

After moving to Greely, Ontario, Major McAuley joined 75 Barrhaven RCACS as DCO to Major Matthew Alle, CO and founder of the unit. In June 2019, Major McAuley was appointed CO of 75 RCACS. As CO, he is excited to take on this role and work closely with 75 Squadron’s youth to improve the Barrhaven community and to focus on a positive and inclusive program for all.

Outside of his involvement with the cadet program, Major McAuley is the Senior Officer responsible for partnerships and external outreach at the Canadian Commercial Corporation. With over ten years of experience working for the Government of Canada, he has held various government and stakeholder relations roles.

He is married to Justin McAuley. Together, they are active members of the community and passionately work to advance human rights and to help make Canada a better place.