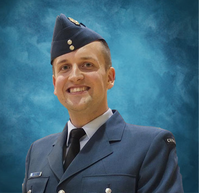 Originally from Newmarket, Ontario Maj Matthew Alle joined the cadet program in 1999 as a cadet of 94 Newmarket Optimist RCACS, eventually graduating the cadet program in 2006 as the Warrant Officer 1st Class of that squadron. Major Alle then moved to Brandon, Manitoba to begin his Bachelor of Science (hons) Degree at Brandon University. While in Brandon, Major Alle began to volunteer with 82 Brandon RCACS and eventually enrolled into the Cadet Instructor Cadre of the Canadian Armed Forces reserve.  In 2010, Major Alle graduated with his degree and moved to Ottawa, Ontario to pursue his Master’s of Arts degree from the University of Ottawa.

In Ottawa Major Alle began volunteering with 742 National Capital Squadron, first as the Assistant Training Officer, then Training Officer and eventually Commanding Officer in 2013. Major Alle worked with an exceptional team of individuals to help grow the squadron to 320 cadets, making it the largest squadron in Canada. In 2017, Major Alle relinquished command of 742 Squadron to pursue the creation of a new squadron in the growing community of Barrhaven. 75 Squadron was formed in the final year of Major Alle’s tenure at 742 and he looks forward to assuming command of 75 in its inaugural year.

Outside of his involvement with the cadet program, Major Alle works for OpenText Corp., Canada’s leading information company, as a Customer Relationship Executive. He is married to Captain Sarah Alle and they have two children together. Major Alle believes in community volunteerism, citizenship and ensuring that cadets are learning through a fun, safe, and engaging environment